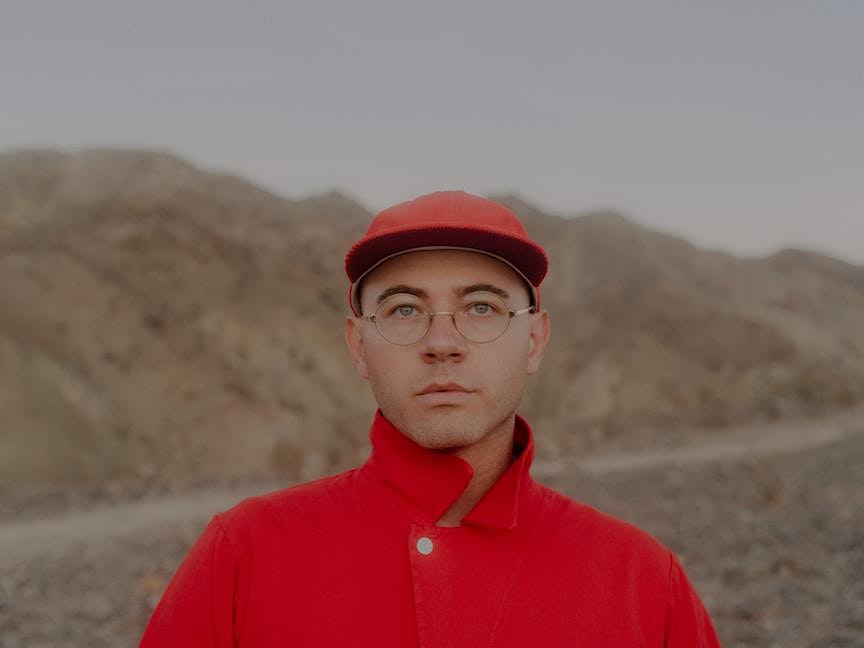 In April of 2018 James Hinton relocated from Brooklyn to isolate himself in the Green Mountains of Vermont and continue to work on the tracks that would make up his rave and grime-influenced fourth LP as The Range. When naming the new album, he landed on a word that captured both the deep intensity of the songs and their multiplicity of meanings: Mercury. The mirror-like surface of liquid mercury made him think about the way his music reflected specific memories from his life. Mercury poisoning causes mad hatter’s disease, a neurological disorder characterized by behaviors including depression, apathy, and social anxiety, all moods that had taken hold of him during his time alone in Vermont. Hinton, who holds a degree in physics from Brown University, also thought of the planet Mercury and its fraught position as the closest planet to the sun. Eventually, as the sun expands into a red giant star, Mercury will be burnt up and consumed. Hinton had been verging on burnout in his creative process and liked the idea of Mercury continuing to exist despite its cataclysmic trajectory – as he puts it, “scorched but still in orbit.”

Hinton escaped the overstimulation of New York City thinking the lack of distraction would help him find the focus to complete the album. But he soon discovered the dark side of rural life and came to see it as “existentially scary.” He knew no one and would sometimes go for a month or more without seeing another person. “I think it’s starting to become a bit of a vogue to leave the city for the country but I might serve as a cautionary tale,” he says. “Yes, there is more and better quality time to work on your art, but it can become a prison of your own making. That level of isolation magnified some creeping depression that sent me into a really bad spiral for two years.”

Yet the narrative of Mercury is not one of defeat but of defiance. Hinton builds on the techniques he established on his critically acclaimed 2016 LP Potential, seeking to create human connection in the Internet age through sampling vocalists from the corners of YouTube, Instagram, and Periscope. “I feel like I can find ways to express myself in ways that I’m too shy or unable to do in the real world,” Hinton says of the process. Of early album track “Urethane,” he says, “The lyrics ‘last year man got left in the dark – ‘cause man didn’t really have nothing to say’ hit me hard as I was feeling left out and forgotten. I had a mutually agreed upon separation from the world. Those lyrics were defiant to me and a way of fighting back against that feeling.” Mercury both sprawls and soothes across its eleven tracks, following an arc that begins in a dark place but ends in brightness and hope. “I’ve elected to start the album in a period of questioning and tumult with ‘Bicameral’ – ‘When you – when you lied to me’,” says Hinton, quoting the song’s lyrics, “and finish in a period of optimism with ‘Violet’ – ‘For you – never thought I’d feel this way – for you.’”

Mercury is moody, transportive, and undeniably rave-infused, and although it is indebted to IDM mainstays like Aphex Twin and grime pioneers like Skepta, the album finds Hinton pushing himself outside the constraints of any one specific genre. The result is both maximalist and restrained, huge soft synths up against cruising beats to offset the compressed vocals of his carefully chosen clips. “Mercury is my most wide-ranging album yet,” says Hinton. “My memories of rave music, grime and MPC music are playing heavily in almost every song.”

As Hinton operates within these larger sonic spaces, he gives himself more room to branch out as a musician and producer. “1995” and “Ricercar” skitter and pulse around their R&B vocal samples, rhythms energetically unfurling like frames of Super 8 film. The low bass thrum and soaring vocals of “Bicameral” are itching to be played in a massive room, or, alternatively, soundtrack a midnight stargazing reverie. It’s a track that showcases the duality of meaning that Hinton loves to present in his music. “I am very selective in the phrasing and melody I let in from my samples, and on this album all of the words are specifically chosen to say the things that I am unable to say,” says Hinton. “The original vocal is ‘When you lighten’ but I like that the interpretation of ‘When you lied – when you lied to me’ is equally readable as the phrase repeats and changes.” Album centerpiece “Relegate,” co-produced with Damian Taylor (Björk, The Prodigy), evokes the rush of pure four-on-the-floor but avoids becoming too locked-in. Hinton opens up the mix and imbues the house motifs with his own distinct warm glow. Even as genre and tempo vary throughout the album, it all feels like part of the same cohesive palette.

In its breadth and multidimensionality, Mercury allows us to remember what came before, and reflect upon how we want to make use of the newfound space around us in the future. In his deepest isolation, Hinton found solace in his musical memories and human connection in the words of fellow artists and used both to build a bridge to a brighter day. The album begins to come to a close with “Every Good Thing” and its hypnotic mantra “every good thing that comes your way.” “This song is one of the first feelings of the clouds breaking,” says Hinton. “For me that line means an openness in the way you approach life. It’s about being open to being hurt and taking what may come.”

Stay after the show for a no-cover dance night featuring The Range!