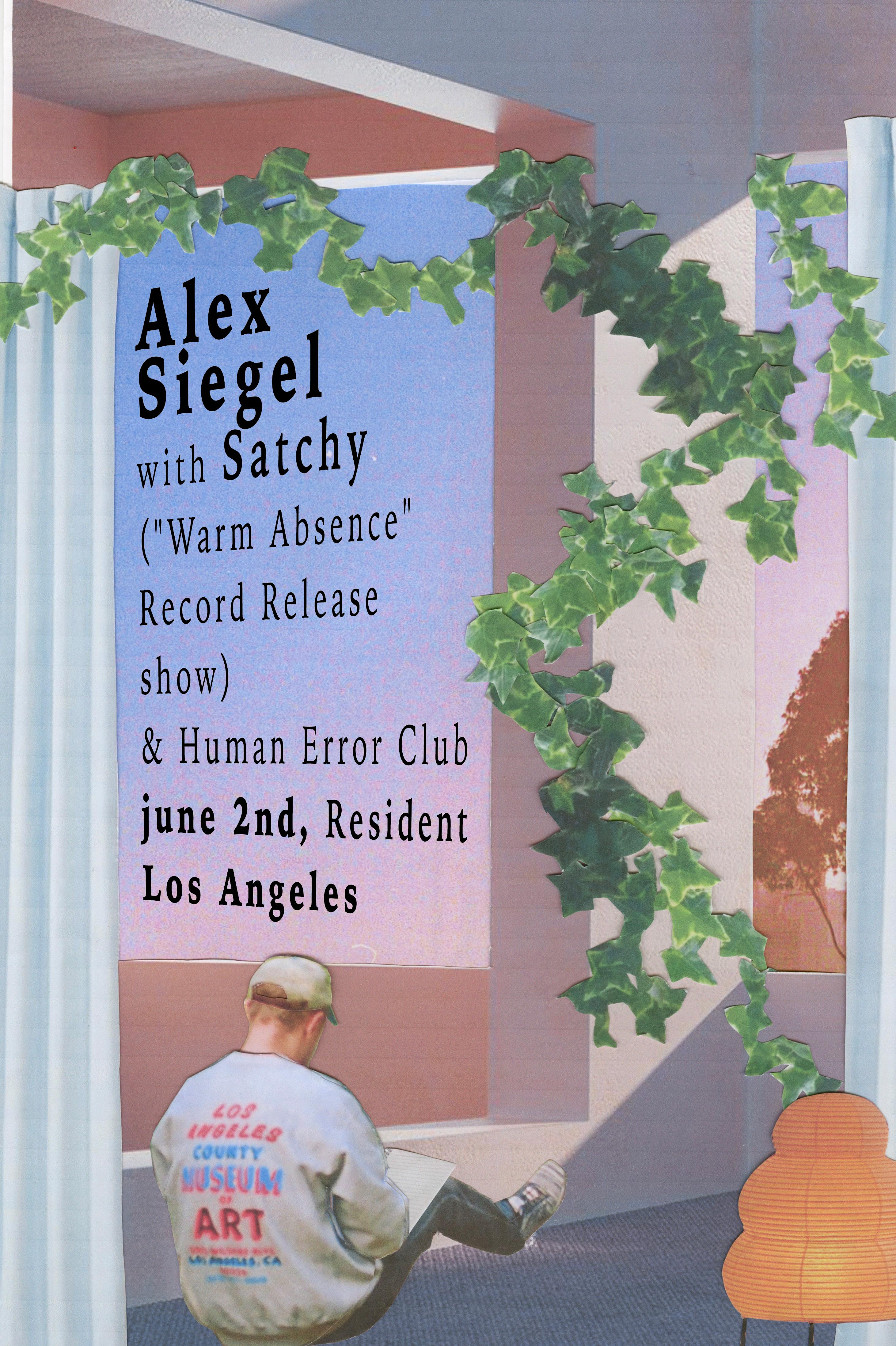 Once an English tutor for kids in San Francisco's Chinatown, Alex Siegel embarked on a music career as if by accident or fate; in 2018 his songs started gaining traction in the bedroom pop underground of Youtube and Soundcloud, and went on to gain millions of streams and draw fans around the world. Alex records all the parts himself. As a musician he toured nationally, supporting Jim James, My Morning Jacket and Electric Guest, and playing Red Rocks, Walt Disney Hall, the Fillmore, Outside Lands, and more.

A product of the Los Angeles music scene, Satchel Brown started Satchy in 2016 as a moniker for his explorations to create jazzy, richly-textured fusion songs that he couldn’t find anywhere else. Although he’d joined bands and recorded music since he was 15, Satchy became obsessed with producing what he describes as “a gumbo of alternative music, a mixture of genres and sounds that could be called ‘alternative soul’.” In his new LP, “Warm Absence” from Babe City Records, Satchy realizes his vision using soulful guitars and blended genres to create a hypnotic sound all his own.

The inspiration for “Warm Absence,” says Satchy, is the Black music, art and expression he first discovered in his home. “My dad is a huge jazz head and would always be painting jazz artists or doing some jazz musician’s album cover,” he recalls. “Meanwhile, my mom was playing classic soul on the radio.” Satchy claims his influences include the classic funk and innovative songs of Sly & The Family Stone, Patrice Rushen, Gil Scott Heron, A.R. Kane, Roy Ayers and Sun Ra. But he also took inspiration from Black filmmakers and photographers like Charles Burnett and Carrie Mae Weems. Collecting old groove records from the ‘70s, Satchy fell in love with the sound of live music on vinyl—“sound that’s not too clean, but not too dirty, either.” And he tried to recreate that effect with his own music, rejecting the sharp-edged perfections of modern digital recording.

Conceived in 2019 while living in a group house at college—Satchy attended California Institute of the Arts—“Warm Absence” was originally written and recorded entirely by Satchy, playing every instrument (guitar, bass, piano, vocals) into his computer. From there, “Warm Absence” took shape in the hands of famed L.A. producer Roger Habon (aka 10.4 ROG) who remixed and produced the tracks taking them to a new level. With production partly occurring during the covid pandemic and quarantining in 2020, there’s a meditative tone to Satchy’s lyrics as he deals with grief from the loss of family and relationships. “This album came from a lot of introspection,” he says. “Those experiences found expression in this record.”

These days, when not recording in his home studio setup in Alhambra outside LA, Satchy teaches kids music production -- and he continues collecting rare records and exploring innovative ways to blend wildly different music genres. In “Warm Absence,” Satchy has accomplished the rare feat of merging musical styles from decades ago with a thoroughly modern sensibility. The result, as Piotr Orlov of Afropunk observed, is “an extended musical walk-about that reflects a wholly original vision.”

“Warm Absence” was released on April 1st by Babe City Records, available on vinyl, as a limited-edition cassette and digitally worldwide.