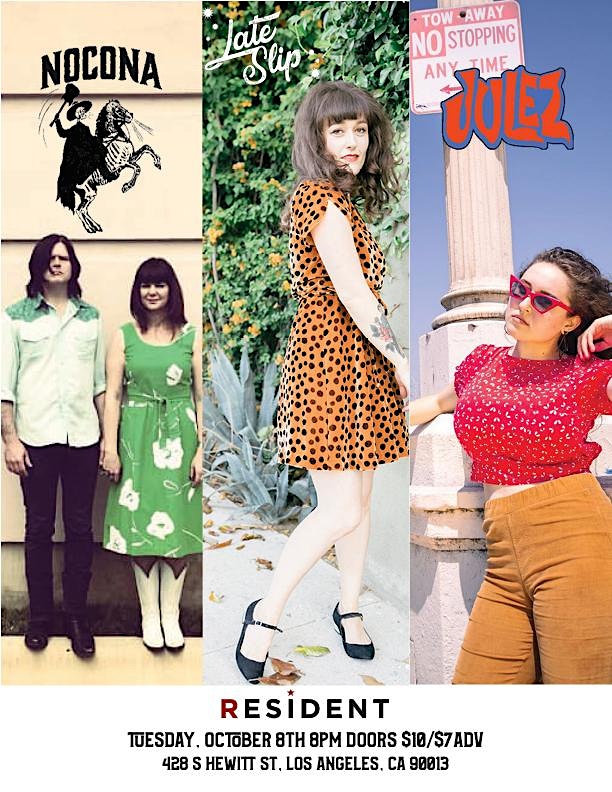 Growing up in love with Elvis Presley and idolizing Gwen Stefani, Late Slip’s Chelsea Nenni (vocals, guitar) developed an affinity for rock n’ roll and heart-on-your-sleeve songwriting at a young age. 2016’s "Other Men" EP, recorded by Cian Riordan (Sleater-Kinney, Beth Ditto) at Barefoot Studios in Hollywood, was reviewed as “a rollicking four-song romp that grapples with the theme of love lost, without descending into tones of bitterness or self-pity.” (Ethan Ames, the Deli Magazine).

Nocona is a rock band with history who draw their roots from Country, Folk, Punk, Rock and psychedelia. They are known for taking the psychedelia of the 13th Floor Elevators and mashing it up with the Bakersfield sound—Roky and Buck; Love and the Burrito Brothers. Their two previous albums, Nocona and Long Gone Song drew rave reviews and the band has played some of the biggest festivals in America – Outside Lands, Bonnaroo, and Stagecoach.

Nocona begins with the husband/wife team of Adrienne and Chris Isom. Chris previously played with Mooney Suzuki as a guitarist, and played and toured with Adam Green. Adrienne, along with playing bass,is a founding member of the all-female music production team, Rebelle Road. The Isoms – who played in New York, Austin, and Toronto before finally relocating to Los Angeles -- founded Nocona as a successor to their previous L.A. group, Paladino, with former Old Californio drummer Justin Smith, who like them worked regularly at the Grand Ole Echo, the city’s Sunday roots music showcase. “Justin and I hit it off really well,” Chris says, “because we have the same garage rock backgrounds, but we also like a lot of the Americana stuff. He’s really a much more encyclopedic store of music than I am.”

The core members have found simpatico players in harmonica ace Elan Glasser, steel guitarist Dan Wistrom, and fiddler Xander Hitzig. “I can’t give Xander and Dan enough credit for what they brought to the table,” says Isom. “Xander plays in a great band called the Hitzig Brothers – he’s a polymath, an amazing banjo player, an amazing mandolin player, guitar player. Dan’s the man. He approaches the pedal steel in an unorthodox way. He’s ready to go out in a crazy, psychedelic place that a lot of pedal steel players won’t go – it’s not their comfort zone if you want them to do super-weird stuff.”