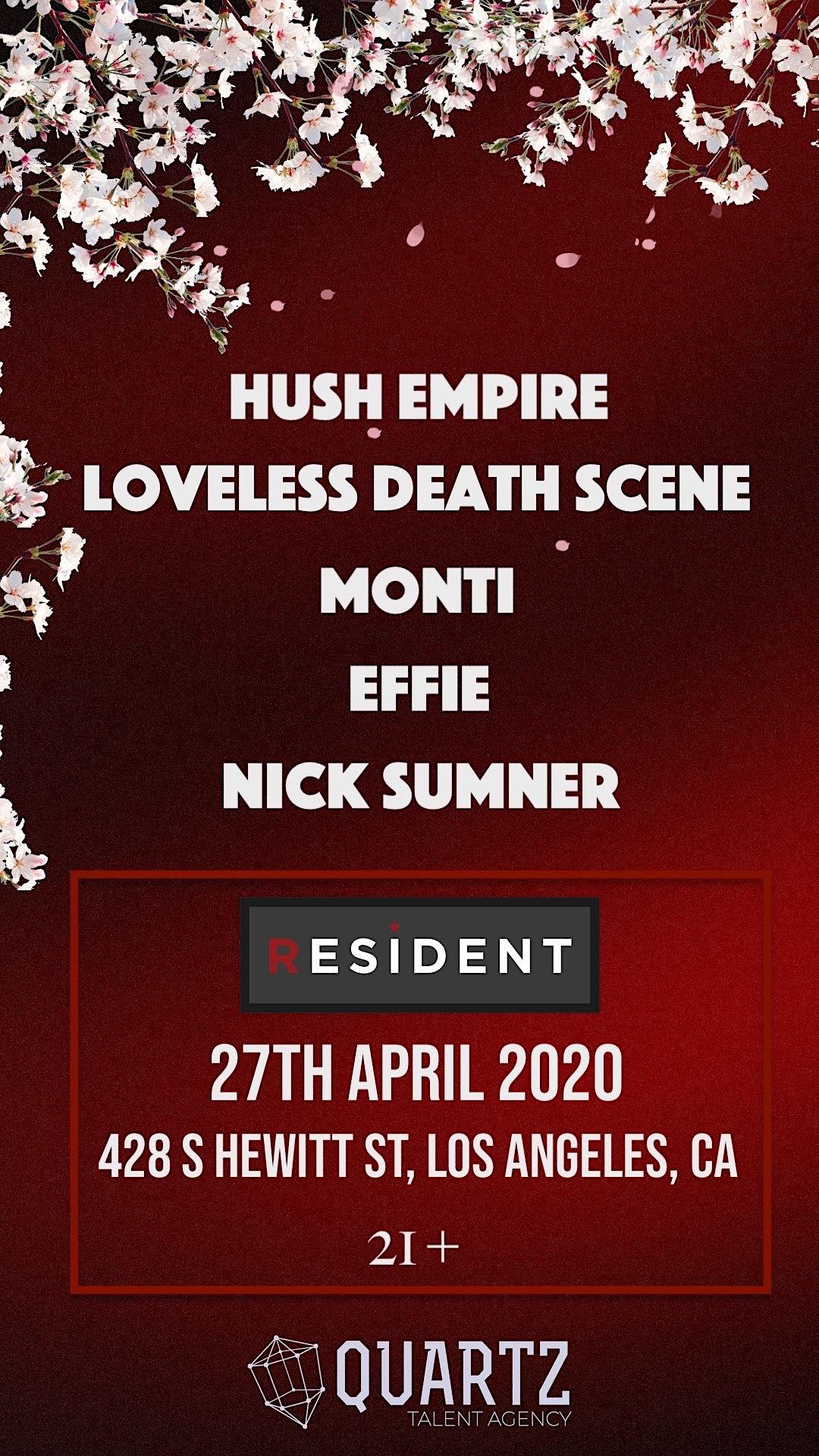 Los Angeles based band Hush Empire's front man Nick O'Leary will display a diverse and incredibly mesmerizing vocal sound encompassing a dark, moody, R&B and Alternative Rock roots mixture that will have you longing for more.

Monti is the brainchild of Los Angeles based singer-songwriter Lauren Silva “Monti”. Formed in 2014, Monti’s music empowers the next generation with thought provoking lyrics about overcoming a life of hardships. Born into an abusive broken home filled with drugs and alcoholism, Monti was a runaway who dodged foster care systems living off and on the streets, escaping a life of gangs, mental hospitals, group homes, and drug and alcohol abuse. Her turbulent past is brilliantly conveyed in her debut EP, "This Is For You;" credited to be reminiscent of P!nk. The EP was produced and co-written by Josh Stevens (LMFAO, CalvinHarris, The Game) and Mario Marchetti (Jojo, Demi Lovato). Celeb Mix describes it as "moody synth with intoxicating rhythms, expressive lyrics with scrumptious soulful vocals.

Self-dubbed “The Patron Saint of Synthpop,” Loveless Death Scene is the recording project of multi-instrumentalist and producer Carlos J. Ruiz III. Following years of Soundcloud releases under various aliases and monikers, Carlos self-released Loveless Death Scene’s first record, 6-song EP “Hopeless Dream Machine,” in 2017. All of the music is performed, recorded, mixed and mastered by Ruiz, a process he describes as “incredibly taxing, but incredibly rewarding.” An adamant adherent to the DIY ethos, everything about the project is kept “in-house,” down to the artwork that represents his releases, which is illustrated by visual artist and close friend SHOGUNDRO (real name James Campos). 2017’s “Hopeless Dream Machine” was followed by “Witching Hour Pop Music,” a 4-song EP released in 2019 on Carlos’ own label, ”Young Avarice.” With melancholic, left-field pop anthems such as “Midnight Blue” and “Voyeur,” “Witching Hour Pop Music” further exemplified why Death Scene’s self-appointed title as “The Patron Saint of Synthpop” may well be justified.

New York native Singer/songwriter Nick Sumnerbrings nostalgic riffs combined with beautiful and soulful lyrics. With a relaxed romantic rock vibe Nick Sumner and the Assistance will have you in their introspective sway and you’ll be left feeling fulfilled and exhilarated.

Band members Nick Sumner, Akil James, John Naeder and Jordan Gutshall work together seamlessly and harmoniously to create a beautiful and long lasting experience that will stick with you long after you hear them

Effie Passero is a 28 year old singer/songwriter originally from Modesto, CA but has been in LA for 3 years. She was recently seen on ABC's first revival season of American Idol where Variety, Hollywood Reporter, and Billboard called her a standout as well as a fan favorited under dog. Since her appearance on national tv, she has gone on to work globally, touring Mexico multiple times, and nationally, where she has been seen touring with the human rights campaign's gala dinners. She sang background vocals for Barbara Streisand's latest album, and has a song streaming in Starbucks all over the country. She has written two theme songs for the OWN channel, where the songs have gone on to get acclamation from people all over!