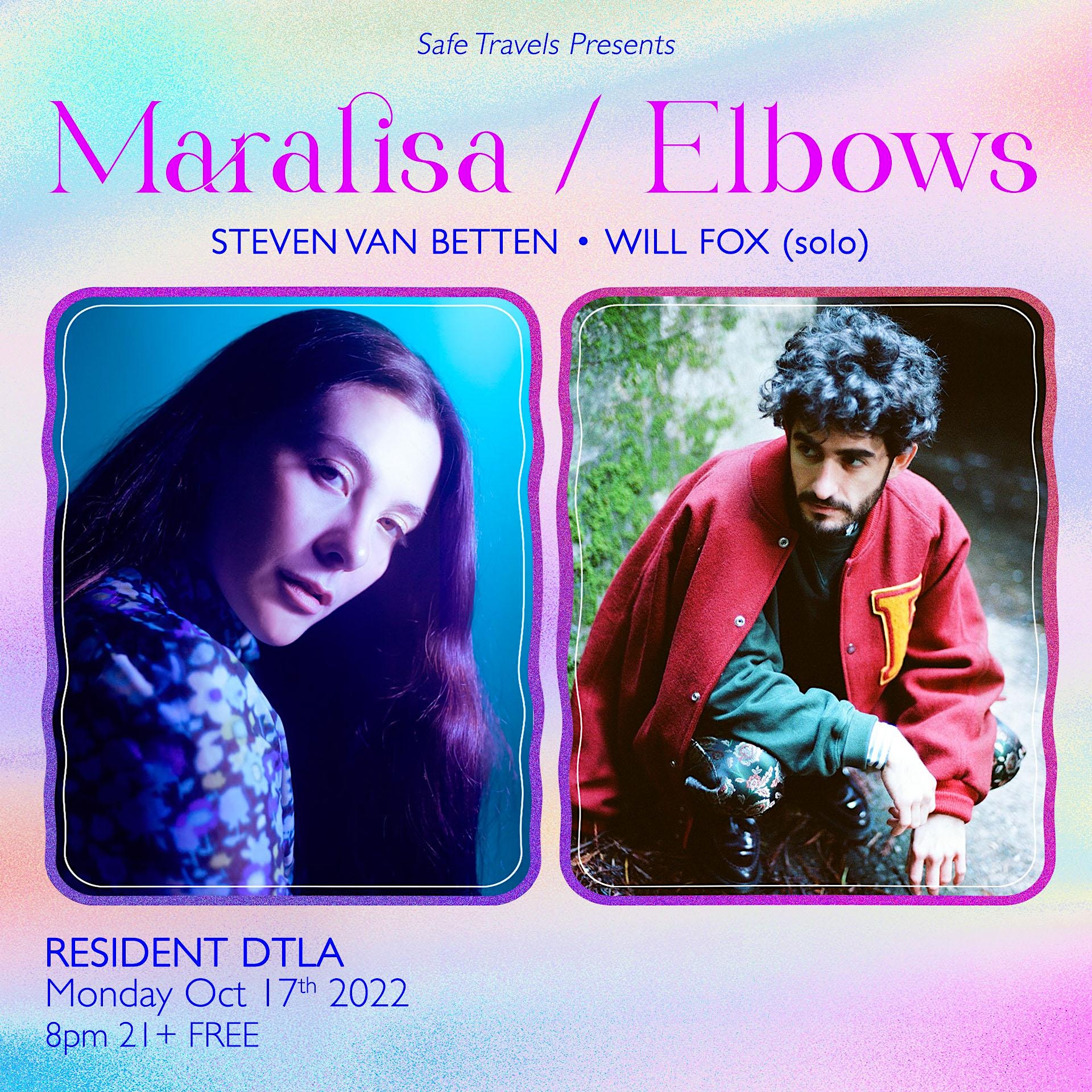 Appearing at Resident for a special duo performance is singer/songwriter/producer Elbows and singer/songwriter Maralisa, both originally from the Bay Area and now based in LA. Trading songs back and forth, the two will perform selections from Elbows’ 2021 debut album Tales From The Old Mill (EveryDejaVu Records), a warbling concoction of psychedelic pop, jazz, hip hop, funk and electronic, as well as Maralisa's upcoming solo album produced by Elbows, a hypnotic melding of psych-pop, folk and 60s soul. Maralisa doubles as frontwoman for psych-soul band Space Captain (Tru Thoughts Records), and collectively she and Elbows have appeared alongside artists such as Natalia Lafourcade, Khruangbin, L'Rain, and Nick Hakim, and performed throughout North America.

Steven van Betten is a songwriter living in Los Angeles who’s taken aim on storytelling. From reflections of the American West to the depths and intimacies of human relationships, his lyrics reveal the magic hidden in mundane day-to-day life. Born and raised in Blue Diamond, Nevada—a tiny, rural, desert community—his music is inspired by time spent playing guitar in rocky canyons, taking breaks to climb the sandstone and search for swimming holes in the sweltering sun. Echoing across dim, lamplit living rooms, his solo shows are vulnerable, tender, and brutally honest.

While it’s easy to connect some of what he does to a tradition of folk greats like Randy Newman or Towns van Zandt, there’s undoubtedly a modern boundary that Steven is pushing. Deeply experimental and informed by contemporaries like Luke Temple and Sufjan Stevens, there’s hardly a category he fits into neatly. You can’t predict whether a given song will make you chuckle or tear up, but he has a way of being reliably emotional and potent.

When he’s not alone with his guitar, Steven can be heard in groups such as Fell Runner, Kidi Band, SK Kakraba, and Desert Magic, among others. He’s collaborated across disciplines, composing for dance, film, animation, and theatre, and he’s the Co-Founder and Producer of the Annual Blue Diamond Music Festival, Jam at the Barn.

Like many before him in the canon, Will Fox is a vagabond. Born in Houston, TX, raised in London, Paris, and the American South, Fox spent his adolescence moving around, practicing, and playing. His travels even took him to Rio de Janeiro, Brazil where he studied Bossa Nova, expanding his craft. Back stateside, destined to operate a gristmill near his hometown in the Shenandoah Valley, Fox instead moved to Los Angeles to become a troubadour.

In his songs you'll hear his lifetime's array of influences compounded from the intricate fingerpicking of Nick Drake and Leo Kottke, to the romantic croon of Chris Bell. From the songwriting deities themselves like Neil Young or George Harrison, to modern heroes like Cass McCombs or The Clientele.

There's a timelessness to his affect, a kind of ageless otherworldliness one can only achieve through experience. And yet, there's something unique and youthful about it. It's fresh faced. It's hi-fi. Often Fox’s progressions and melodies subvert your expectations and stray into unlikely places. Maybe it’s the Bossa Nova in him? Maybe it's in the cosmos... Whatever the case may be, this much is true: these are good songs sung by a man who is never bashful and who laces his vulnerability with wisdom.