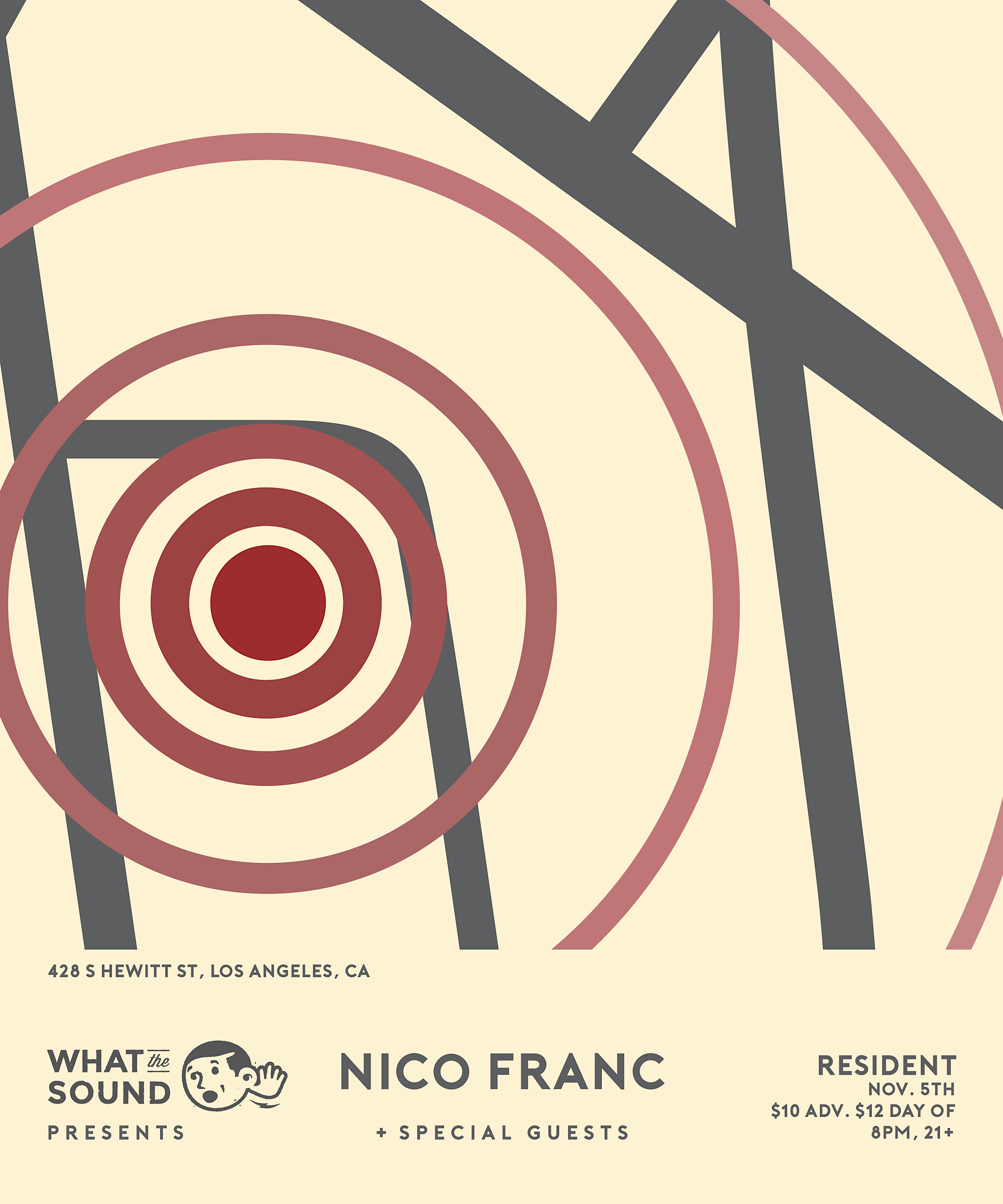 What The Sound Presents: Nico Franc, The Dumes, Annabel Lee

What The Sound Presents: Nico Franc, The Dumes, Annabel Lee

Nico Franc is an LA based soul artist who has brought his design background to the world of an independent singer-songwriter.

From writing to performing to designing his merch, Nico utilizes the principle of minimalism to communicate every thought or feeling clearly and simply. His music conversationally translates the moments in life where love is at stress, leading the listener to reminisce in their own experiences with love.

“Music has always been therapy for me. It creates a little pocket for people to put down their problems for a moment, and when I experienced that for the first time, I knew it was the only thing I wanted to do for the rest of my life. Music taught me how to celebrate myself, and the idea of consciously creating a present moment in people’s lives to celebrate themselves fuels everything I do...” Franc remarks.

Since 2016, he has embarked on ever-growing DIY tours that started in his home region of New England and are now spreading to the south and midwest. Along with selling out one of LA’s most prominent live music venues, The Hotel Cafe, Franc has opened up Sundance Film Festival 2019 on the Acura stage, placed his songs in film and television, and is currently working on his debut record estimated to release early 2020.

The Dumes is an LA-based rock band that began as the brain child of magnetic front woman Elodie Tomlinson. Originally intended to be a solo project anchored by her sultry and powerful vocal prowess, Elodie quickly attracted likeminded musicians to create a five-piece band, honing in on a distinctly alternative sound that pays homage to the essential elements of rock music. Billboard premiered the band's first single “Caught in the Middle” which spent two weeks at #1 on KROQ’s Locals Only chart. The band’s next single will be released at the top of 2020.

Annabel Lee is a "force of f***ing nature" who makes pop music with a grunge disposition. Born and raised in North Dighton, Massachusetts, Annabel (born Sarah Borrello) grew up playing classical piano and writing prolifically. This hot blooded singer-songwriter summons the intellectual grit of artists like Fiona Apple and Alanis Morrisette, paired with the unorthodox and commanding energy of a punk band playing in a dingy basement. By age 16, Annabel was performing regularly & winning prestigious songwriting awards all over New England. Touring the country and collaborating with acts such as Amanda Palmer and Warren Cucurullo- Annabel toured the country under her birth name for many years before finding her artist identity. In 2016 she uprooted her life in Massachusetts and moved to Los Angeles to pursue a career as an artist. She has since been filling rooms all over LA, and has been grinding to solidifying her place in the community. Over the past year Annabel has released four singles from a raw, rock and roll, mostly live crowd funded album that she made in the winter of 2018 with her friend/producer/creative powerhouse Michael Mcquilken. On top of releasing music, she was selected to be a contestant on the NBC songwriting competition ‘Songland’ during it’s pilot season, where she performed and pitched an original song to Ryan Tedder, Ester Dean, Leona Lewis, and Shane Mcanally. Currently, Annabel is in the studio and working on new music and is planning a release for the fall of 2019.