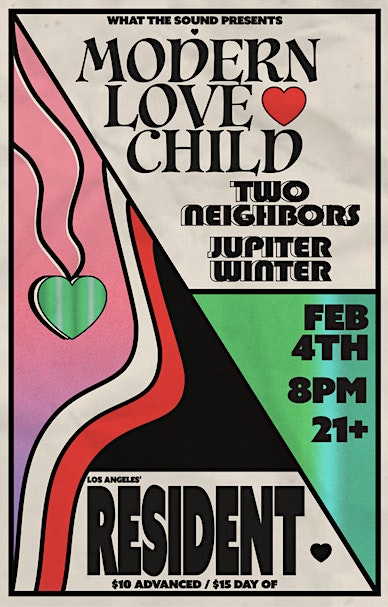 Originally from a small town in Connecticut, Jonny drove west to Los Angeles to chase down a dream of recording and performing music. By 2012, Jonny had acclimated to his new hometown and was enamored with Venice Beach -- his days included strict adherence to a lifestyle of surfing when he wanted, working an unfulfilling job when necessary and making music whenever possible. He formed the band Blue Blazer, a quintet that became a local favorite up and down the Sunset strip. After they called it quits in 2015, Jonny began exploring a more autobiographical way of writing that confronted his conflicted upbringing, comparing the glossy life of the one percent on the eastern seaboard with his dad’s teachings of humility and hard work. And thus, Modern Love Child was born.

Jonny temporarily relocated from Venice Beach to London where he slept on couches, recorded during off hours in various London studios and ultimately inked his first label deal with All Points records. His debut album is due for release in October of 2019.

Two Neighbors is an LA-based duo consisting of singer/songwriter Sophia Pfister and producer/guitarist/percussionist Andre Mohring. The two met as literal neighbors in Highland Park, LA and have coined the term “hard-pop” to define their hard hitting, yet intricate and relatable sound. The group made their debut in late 2019 and have quickly captured the attention of the LA scene. Their unique juxtaposition of hip-hop, rock and dark pop vocals makes you want to dance, headband, and cry all at the same time.

Jupiter Winter br is the LA-based indie-pop collaboration between Lelia Broussard (a singer-songwriter from Louisiana) and Royce Whittaker (a Canadian). Heavy on the synths. Heavy on the feelings.