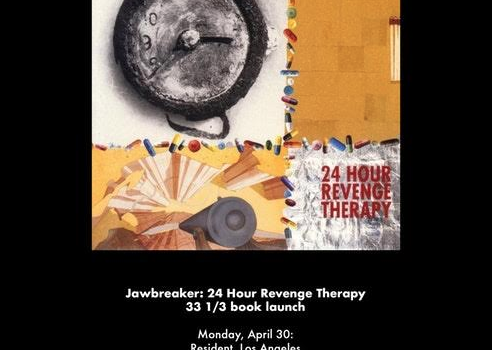 Where were we? Ah, yes. East 7th Punx are bringing anarcho-punk institution Antisect to Resident tomorrowevening, joined by Blazing Eye, Resist and Exist and Dead Tribe. Tickets still available, but not for long.

This Saturday, we’re kicking off Music for the Masses: New Wave Nite. DJs Ultra Grrrl and Colin Johnson are serving up a decent dose of Depeche Mode, New Order, Bowie, the Smiths and co., so brush up on the best new wave hits beforehand. Free with RSVP.

Dana Buoy comes through on Sunday with Night Shop and Wild Pink. Check out “Twisted Sky” for your dark pop fix. We’re kicking off next week with the launch party of Ronen Givony’s 33 ⅓ book on 24 Hour Revenge Therapy. And the rumors are true—Adam Pfahler and Chris Bauermeister of Jawbreaker will be in attendance for a Q&A. Nerd out.

On Wednesday, A.O. Gerber is bringing a little tenderness to your weeknight. Trust me, you’ll want to hear her first.

Do Cinco de Mayo right. We’ve got the whole day planned, beginning with Voyager Institute and an early set by DJ Clifton in the garden beginning at 5 p.m. Once the sun goes down, we’ll be joined by August Eve and Sister Mantos. Dave Parley of Prayers hosts!

Next up, we’ve got a stacked lineup for the Flower Moon Records release show (Tuesday, May 8), a celebratory Selena-themed brunch (Sunday, May 20), plus upcoming appearances by Portland-based popstar Lizzy Land (Tuesday, May 22), disco-punk dreamer Low Hum (Wednesday, May 30) and Olden Yolk & Mega Bog (Thursday, June 14). Copy?