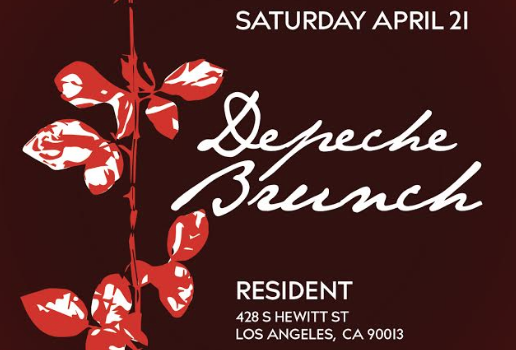 We’re kicking off this week with a blast from the past. Tonight Green Slime presents the Stompin’ Riff Raffs, bringing you rock and roll straight out of Tokyo. Tom Kenny & the Hi-Seas will be opening—you may recognize his voice from Spongebob Squarepants. *Swoon*.

Tomorrow, we’re stoked for psychedelic space rockers Moonwalks, joined by Acid Tongue (fuzz-pop-stoner-rock) and Collin Cairo (think Gary Numan meets Gram Parsons). Celebrate the weekend with yet another Feminist Friday, featuring Jackie Jackson & Her Royal Gents. But get ready to switch gears on Saturday—it’s Depeche Brunch, baby. We’ve got DJs worth rolling out of bed for, plus drink specials including the Black Celebration: a play on the Oaxacan Razorblade, but made with active charcoal. The elixir of life? You decide.

Up next on Saturday night is My Melody: an evening dedicated to old school hip hop. Come out to throw back. Close out the weekend with Levitation Room, The Mad Walls, Grave Flowers and Supermercat on Sunday. Don’t miss the chance to see these hometown heroes before they’re off to tour in Europe this May.

We’re serving sweetness this Tuesday with Tomemitsu, whose latest video for “Secrets” just premiered over at LA Record. He’ll be joined by Lunch Lady and Ruby Haunt to celebrate the release of his EP. An alright school night, if you ask me!

NoMBe has just been added to the sold out Mikky Ekko + Mansionair show on Friday, April 27. Check out this interview between NoMBe and Mansionair ahead of the tour. We can hardly wait for Dana Buoy, Night Shop (of Kevin Morby and the Babies) and Wild Pink on Sunday, April 29.

Field trip! Resident Presents is bringing you another show off-site at the Pico Union Project. Look out for Bing & Ruth on Saturday, May 5. In the meantime, we’ve announced a bunch of new shows, so pencil us in! Look out for the Peach Kelli Pop video premiere party on Monday, May 7, The Knitts on Wednesday, May 23, Dear Rogue on Monday, May 28, Alex Zhang Hungtai on Sunday, June 3 and Dylan Carson of Earth on Tuesday, August 7. Whew!

Look out for the Sound and Fury after party at Resident on Saturday, July 14. Hardcore institution Iron Age will be gracing us with their first L.A. performance in eight years. *Chef’s kiss*.

Lez Croix is back with a unique Halloween experience, gathering some of the LGTBQ's communities biggest local talents!

Get dressed up and messed up this Halloweekend at Cuffing Season + TFTI's full venue takeover of Resident!